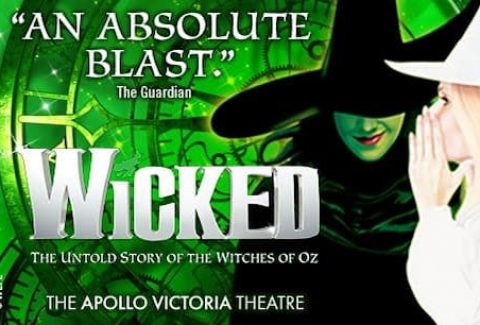 WICKED, the smash hit musical that tells the incredible untold story of the Witches of Oz, is pleased to announce the opening of its 25th new booking period on Monday (22 January 2018). Over 500,000 new tickets for “the world class West End musical” (Official London Theatre) are being released, with booking extended to Saturday 25 May 2019.

"Wicked is amazing. Absolutely amazing" — Daily Mail
"A remarkable kaleidoscope of magical shocks, surprises and sensations – Wicked works like a dream" — Evening Standard
"It is magnificent to see a musical that manages to be both populist and intelligent at the same time" — The Sunday Telegraph

Latecomers will be admitted at a suitable point. The venue’s recently refurbished full-fresh-air ventilation system ensures that everyone in the auditorium has 12 litres of fresh air per second, well above the recommended minimum of 10 litres per second. Cashless payments, at-seat ordering/delivery and enhanced cleaning practices are all in operation. Hand sanitation stations are available throughout the theatre.