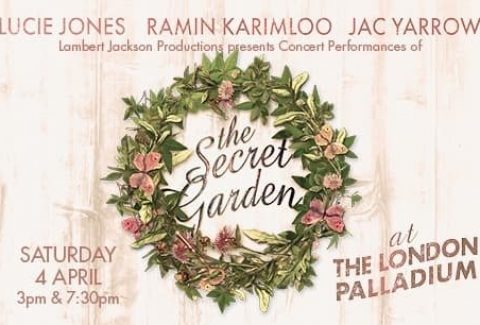 Jac Yarrow, Lucie Jones, and Ramin Karimloo lead the cast of The Secret Garden at the London Palladium.
From £32.00
Book Tickets

“What was that? Where did it… There it is! It’s a key! It’s the key to the garden! I found the key to the Secret Garden! But the door! Where is the door…”

When The Secret Garden first premiered on Broadway, it was met with rave reviews, international success and multiple Tony Awards. Now it is returning to The London Palladium for one day only.

Based on the much-loved literary classic by Frances Hodgson Burnett, this heart-warming story is re-imagined in brilliant musical style by composer Lucy Simon (Doctor Zhivago) and the Pulitzer Prize-winning playwright Marsha Norman.

Young, orphaned Mary Lennox arrives at her uncle’s secluded country home to find a reclusive, long-suffering collection of souls — and the mysterious tale of a secret garden. Together with new-found friends, Mary breathes life into the secret garden. She blossoms too, and through her adventures, tends to all the hearts around her.

Brought to you by the team behind the five-star concert version of Doctor Zhivago; The Secret Garden will star some of the best talent the West End has to offer. Leading the cast are Lucie Jones (Waitress), Ramin Karimloo (Phantom of the Opera) and Jac Yarrow (Joseph and the Amazing Technicolor Dreamcoat) who will be directed by international director, Nick Winston (Cats, Mame, Guys and Dolls).

Please Note: This performance was originally meant to take place on Saturday, 4 April 2020 at the London Palladium. Due to COVID-19, the one-off show will now take place on 15 November 2020 at the Adelphi Theatre.