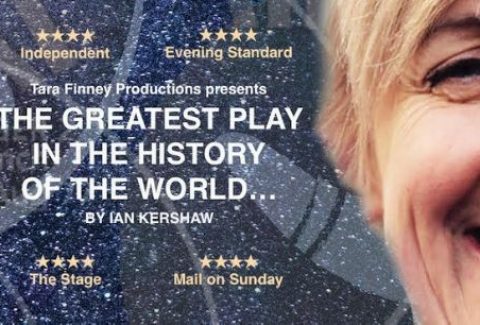 The Greatest Play in the History of the World

The Greatest Play in the History of the World
From £42.00
Book Tickets

The Greatest Play in the History of the World…

A man wakes in the middle of the night to discover that the world has stopped.

Through the crack in his bedroom curtains he can see no signs of life at all…other than a light in the house opposite where a woman in an over-sized Bowie T-shirt stands, looking back at him.

Following a sell-out run at Traverse Theatre at the Edinburgh Fringe 2018, where Hesmondhalgh was the winner of The Stage Edinburgh Award, The Greatest Play… transfers to Trafalgar Studios for six weeks only.

The production was originally produced in association with the Royal Exchange, Manchester.

★★★★ ‘about as close as theatre can come to being hugged for 70 minutes non-stop’ Independent
★★★★ ‘as clever as Einstein, as cosy as a pair of old slippers, and a joy to watch’ The Herald
★★★★ ‘expertly directed by Raz Shaw’ Evening Standard
★★★★ ‘a love letter to life’ Mail on Sunday
★★★★ ‘just magical’ What’s On Stage
★★★★ ‘a quirky and charming little play which is beautifully executed by Hesmondhalgh’ Broadway World