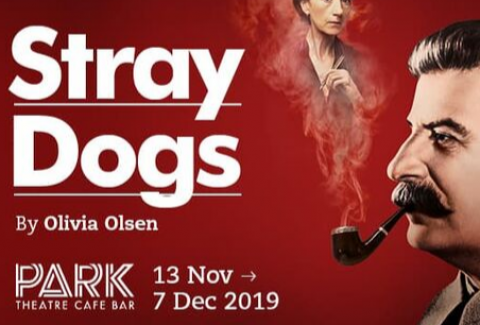 Stray Dogs will have its world premiere at London's Park Theatre
From £22.00
Book Tickets

Russia. 1940. A land gripped by fear; where language is a weapon – where poetry is power.

Anna Akhmatova, the most celebrated poet of her generation, has lost her first husband to the purges and her son to state prison, where he awaits execution. Now, Stalin, the tyrant responsible for the murder of everyone close to her, wants a favour…

Plunged so far into obscurity she is believed to be dead, Anna is offered a renewal of life when the Russian/British philosopher Isaiah Berlin risks the hazards behind the iron curtain to find her. But in a world where poetry is a force that can control and move masses for good or ill, which side of the curtain will her loyalty lead her? How far will she go to save a life? How far will she go to save herself?

Based on true events, Stray Dogs depicts the story of one of the most extraordinary women of the 20th century, as she must choose between her duty to her son, her country, her art and herself. This urgent and relevant play explores the nature of tyranny and how it affects both the political landscape of the past and the present.

Children under 12 will not be admitted.

Latecomers may not be admitted.