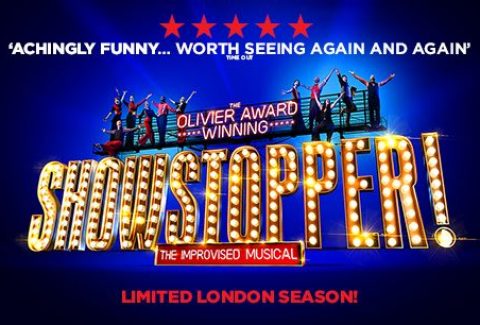 Olivier Award 2016 winners The Showstoppers are back in the West End transforming audience suggestions into all-singing, all-dancing shows with unpredictable and hilarious results.

With a critically acclaimed West End run, a BBC Radio Four series and nine years of festivals and touring to their name, The Showstoppers have delighted audiences around the world with their ingenious, unique blend of comedy, musical theatre and spontaneity.

'Top-dollar amusement that doesn't let up. So polished, deft and stirring, it defies belief.' ★★★★★ Daily Telegraph

Children under 12 will not be admitted.

Online Venue Check-In: Please note you will be contacted by the venue 48 hours before the performance with instructions on how to check-in and retrieve your e-ticket In response to audience demand we are increasing our capacity but continuing to maintain robust covid mitigation measures. In addition to hand sanitation, face coverings and track and trace, other measures will include contactless tickets, temperature testing and the deep clean and sanitation of the theatre. E-Tickets will be given.