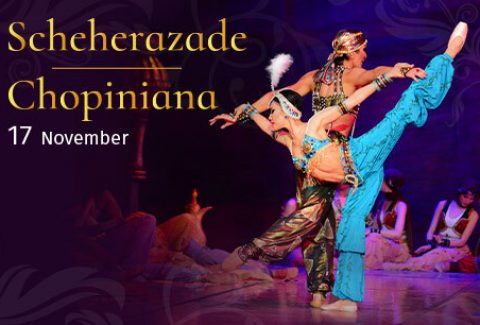 Kazakhstan’s oldest theatre, the Abay Kazakh State Academic Opera and Ballet Theatre, is embarking on major international tours during the 2019/20 season and making its UK debut with the one-act ballets Scheherazade and Chopiniana.

Since its establishment in 1934, this theatre has been associated with an array of Russian and international icons, including the great ballet dancer Galina Ulanova, composer Sergey Prokofiev and opera star Larisa Aleksandrovskaya. Over the years it has promoted its cultural heritage with Kazakh operas and ballets and has staged masterpieces of Russian and Western European repertoire.

Michel Fokine’s search for new forms was expressed in Chopiniana, a work that grew out of his frustration with traditional ballet. At the time it was revolutionary for its cross-cutting actions, unity of music, choreography and scenography, and abundant narratives depicting Chopin’s life and work. The piece was later renamed Les Sylphides.

The outstanding cast of the Abay Opera and Ballet Theatre will delight ballet audiences with its dedication, skill and non-conformist reimagining of world-famous ballet repertoire.

Children under the age of 5 will not be admitted.