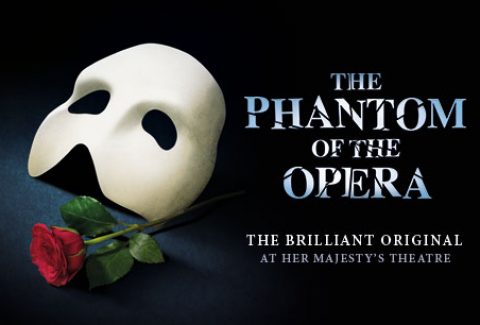 Phantom of the Opera

The Phantom of the Opera celebrated its 30th Anniversary with three spectacular sell-out performances at the Royal Albert Hall in October 2011.

Now in its 26th record-breaking year, this multi-award winning musical continues to captivate audiences at Her Majesty's Theatre in London's West End, after more than 10,000 performances.

"Remains the most exciting musical in London" – Daily Mail

Children under 4 will not be admitted.

For the comfort and reassurance of all our guests we kindly request that all audience members over the age of 11 years take a COVID lateral flow test within 48 hours of their visit to the theatre. Alternatively, please be prepared to show your Domestic COVID-PASS from the NHS App or website (or national and international equivalents) which demonstrates double vaccination plus 14 days or natural immunity. Please bring your negative test result or COVID-PASS to the theatre with you as we may ask to see it on arrival. All audience members must wear a face covering throughout their visit, except when eating and drinking or if they are medically exempt. Children under 11 years of age are not required to wear a face covering. Unless exempt, all staff will be wearing face coverings or shields. If you forget to pack your face covering, please ask a member of staff who will be able to provide you with one.