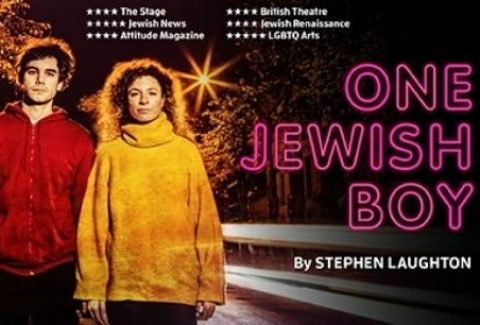 Stephen Laughton's provocative play One Jewish Boy takes its fearless production to the West End for Spring 2020!
From £33.00
Book Tickets

Jesse is paranoid and he's frightened and it's messing up his relationship, his job, his daughter and his life…

In a bittersweet comedy fuelled by anti-Semitism. One Jewish Boy focusses squarely on the inheritances that haunt us. Asking if the fear of hatred, could be worse than hate itself…?

Critically acclaimed, award-winning writer Stephen Laughton (JB Priestly Award for Writers of Promise 2019 winner, and current Writer in Residence for the Astrophysics Department at the American Museum of Natural History) has written One Jewish Boy as an urgent response to overt anti-Semitism.

With anti-Semitism and racism rife in political parties and hate-crime at unprecedented levels, Stephen Laughton explores one young family’s struggle against fear, prejudice and identity.

Following its controversial and sold-out run at the Old Red Lion Theatre, Islington, One Jewish Boy is directed by Sarah Meadows and starring Asha Reid and Robert Neumark-Jones. A Greenwich Theatre and Scene Change Productions co-production.

Supported by Stage One Bursary Scheme for New Producers