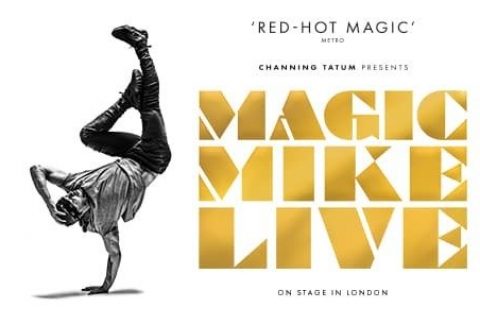 Channing Tatum's Magic Mike Live is “the show that has everything you could ever want” (Glamour UK)
OfferWas £79 Now £65 Saving £14
From £47.00
Book Tickets

The Theatre at the Hippodrome Casino is being transformed into a magical, intimate, 325-seat performance space for Magic Mike Live.  From the bespoke entrance off Cranbourn Street, to the specially curated lounge and bar experience, to the cast of world-class performers, Magic Mike Live is a complete evening of unparalleled entertainment for guests aged 18 and up.  They will enter Magic Mike’s mythical Club Domina and marvel as a group of extraordinary artists perform a 360-degree dance and acrobatic spectacular in front of, behind, and above them.  Sexy dance routines intertwined with one-of-a-kind acts, will be presented by a diverse cast of performers from around the world for this hot new production.

Those under 18 years of age will not be admitted. Valid Government issued photo ID required.

Channing Tatum will not be performing in London's Magic Mike Live.