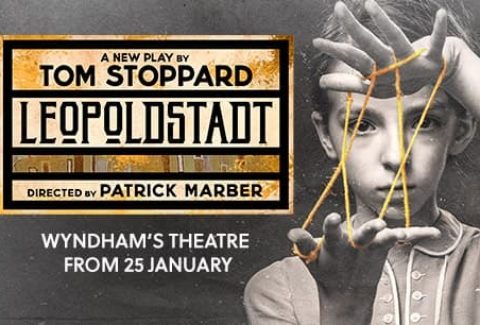 Vienna in 1900 was the most vibrant city in Europe, humming with artistic and intellectual excitement and a genius for enjoying life. A tenth of the population were Jews. A generation earlier they had been granted full civil rights by the Emperor, Franz Josef. Consequently, hundreds of thousands had fled from the Pale and the pogroms in the East and many found sanctuary in the crowded tenements of the old Jewish quarter, Leopoldstadt.

Tom Stoppard’s new play, directed by Patrick Marber, is an intimate drama with an epic sweep; the story of a family who made good. “My grandfather wore a caftan,”says Hermann, a factory owner, “My father went to the opera in a top hat, and I have the singers to dinner.”

It was not to last. Half a century later, this family, like millions of others, has re-discovered what it means to be Jewish in the first half of the 20th century.

Leopoldstadt is a passionate drama of love, family and endurance. It is Stoppard’s most humane and heart-breaking play.

Everyone, regardless of age, must have their own ticket to enter the theatre. Children under the age of 16 must be accompanied by and sat next to a ticketholder who is at least 18 years old. Children under the age of 3 will not be admitted. Latecomers may not be admitted until a suitable break in the performance. You may not bring food or drink purchased elsewhere. AS PART OF THE COVID MEASURES YOU WILL RECIEVE AN EMAIL FROM THE THEATRE 24 HOURS BEFORE THE PERFORMANCE WITH COVID INFORMATION AND INSTRUCTIONS DIRECTLY PERTAINING TO YOUR VISIT **As capacity restrictions are lifted, we ask that all audience members bring with them proof of double-vaccination, a recent negative lateral flow test or natural immunity.** **Simple ways to demonstrate proof include the NHS COVID Pass, NHS COVID-19 test notification, or an internationally recognised equivalent** As a courtesy to each other and to help us provide a comfortable and enjoyable experience for everyone, please: • Wear a face covering out of consideration for those around you. • Do not come to the theatre if you feel unwell, have any coronavirus symptoms or have been told to self-isolate. Email our customer service team and we'll do everything we can to exchange your tickets. • Use the hand-sanitiser available at the theatre. • Be mindful of others and their space, where possible, particularly when moving around the theatre. • Only bring one small bag that can be stored under your seat, as our cloakrooms are not currently available. • Bring a contactless payment card, as our theatres are cashless. For everyone's safety and security, we: • Deliver an enhanced level of cleaning throughout our theatres. • Provide 100% fresh air through our ventilation system. • Carry out contact-free security checks. • Cannot accept cast gifts or arrange opportunities for cast autographs or photos.